The Alchemist to Open in Nine Elms in the New Year

The Alchemist is set to start mixing its otherworldly concoctions in Embassy Gardens at the beginning of 2020. The swanky bar and dining destination currently has four restaurants in the capital, including its brand new flagship venue which opened earlier this month in Canary Wharf. 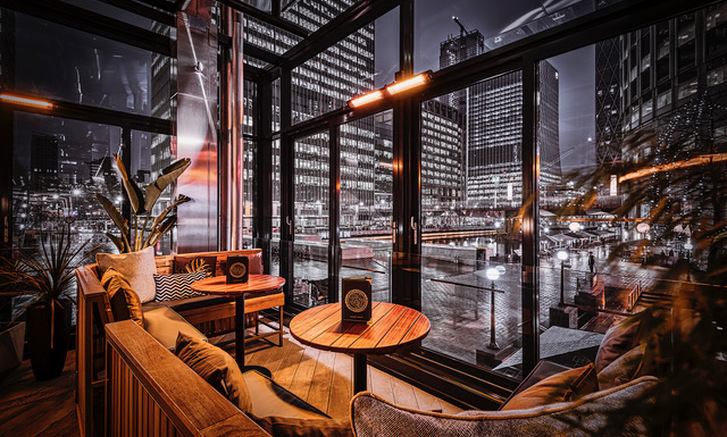 The company, founded in 2010, also has locations in Manchester, Leeds and Liverpool, with more in the works. Like its predecessors, the Embassy Gardens venue is set to continue the brand’s “bewitching” theme, with its theatrical cocktails and a menu packed with classy comfort food.

Following a £1.4 million investment, the new restaurant in Nine Elms will boast over 5,200 square feet of space, as well as a beautiful outdoor seating area. If it’s anything like The Alchemist’s current locations, you can expect a trendy interior decked out with lots of wood, adorned with alchemy-inspired artworks and lit with warm Edison bulbs.

The menu will follow the brand’s tried and true fare, with all-day offerings ranging from The Full Alchemist (a rather indulgent take on the Full English Breakfast) to a variety of lighter daytime options including wraps, buns, burgers, and must-tries like the Philly Cheesesteak Ciabatta or the Grilled Mac ‘N’ Cheese Stack.

The slap-up dinnertime menu has some pretty irresistible choices too, with starters that include Tempura Prawn Lollipops served with Sweet Chili; and Salt and Pepper Pulled Pork with Smacked Cucumber Salad and Pancakes.

For the main event you can take your pick from dishes that include Pan-fried Seabass with Tomato and Fennel Stew; Braised Beef Ragu with Sesame Noodles, Spicy Kimchi and Toasted Coconut; and Crispy Pork Belly with Chorizo croquette, Sweetcorn Puree and Red Pepper Coulis.

Squeezing in a dessert might be a challenge, but with options that include Cotton Candy Baked Alaska; Sticky Toffee Pudding; and Caramel Churros with Hot Fudge Dipping Sauce... well, the temptation may leave you with no choice.

Of course, it’s the theatrical cocktails that will be luring many a Londoner to The Alchemist’s newest venue. Don’t expect a bog-standard Cosmo or Margarita here however – many of The Alchemist’s cocktails look like magic potions straight out of a Harry Potter film – or indeed, an alchemist’s laboratory. Creative concoctions include The Legal One, a tropical gin and vermouth-based masterpiece that comes served in a suspiciously smoking bong. The Banoffee Manhattan, a foamy cocktail-dessert hybrid with whiskey, espresso, and banana liqueur. And the Filthy Rich, a decadent mixture of Laphroaig 10-year, champagne, smoked whiskey, Bristol syrup passionfruit, and last but by no means least, a 24-carat gold vanilla ball. Because, why not?

And if you thought these cocktails couldn’t get any fancier, then you’d be wrong. The Alchemist has also mixed up a selection of ‘augmented reality’ cocktails, which each tell a quirky short story of their own. You can access them by downloading The Conjurer smartphone app and focusing it on your drink’s coaster. Among these clever cocktails are the High Tea in the Clouds which features Hendrick’s gin and Rooibos tea and comes served in a smoking china tea cup. And the Seaside Sour, which features whisky, citric acid, foam and seaweed. You have been warned. If you like your cocktails weird, wonderful and different, The Alchemist in Nine Elms will be right up your street.

Earlier this year Simon Potts, managing director of The Alchemist, said, “We are delighted with the new site at Embassy Gardens and are excited to be part of one of London’s leading regeneration projects. There is huge rejuvenation currently underway in Nine Elms, from Vauxhall and the new US Embassy to Battersea Power Station...”

The Alchemist at Embassy Gardens will be joining a blossoming bar and restaurant scene south of the river, which also includes the New York-inspired Darby’s restaurant, created by renowned chef Robin Gill.