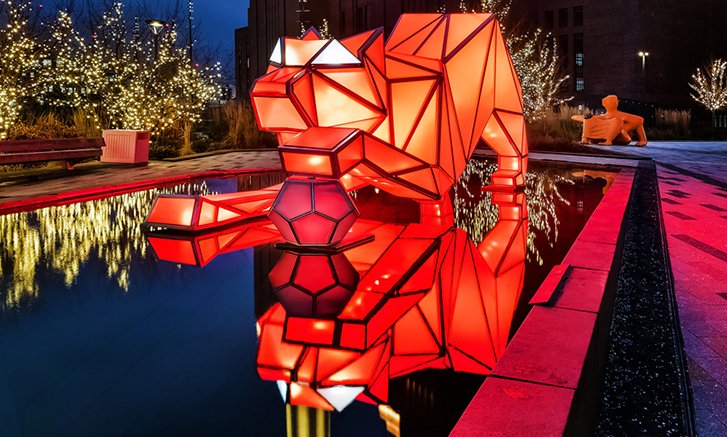 With the nights still long, there’s no better way to brighten the gloom than with a visit to the Battersea Light Festival. The six installations have been produced by some of the world’s most creative and innovative light artists and curated in partnership with Light Art Collection, founded by the Amsterdam Light Festival.
The festival takes place alongside the iconic Battersea Power Station and is on until the end of February. And what’s more, it’s all free.

What installations are included?

Digital Origami Tigers by LAVA (Laboratory for Visionary Architecture) features digital tigers which combine the ancient method of lantern-making with cutting-edge design and technology. The installation also reflects the Year of the Tiger which begins on 1st February.
Antenna Sud by Michela Bonzi features familiar shaped antenna transformed into sculptures that emit light rather than radio waves. The piece is located next to Switch House East. While Run Beyond by Angelo Bonello can be found along the riverbank and features an illuminated running figure.
Victor Engbers who created Greenhouse worked with a professional glassblower to create an entire ‘Greenhouse’ out of the uranium-glass which glows green under ultraviolet light. Greenhouse can be found next to Switch House West.
While situated in the Grosvenor Arch in Circus West Village, Picto Sender Machine by Felipe Prado. The piece is a huge low-res screen with 1200 enlarged pixels where you can record a short video message using only your silhouette, dance steps and gestures, which are then translated into blocks of light.
And finally, Eternal Sundown by Mads Vegas consists of approximately 140 filtered fluorescent tubes which looks like the sun setting over the city.

What else is there to do there?

Once you’ve explored the light installations, there’s plenty of places nearby to grab a coffee or enjoy dinner. Megan’s Battersea Power Station serves everything from all-day brunches to Mediterranean mezze, while the Wright Brothers serves up British seafood and meat dishes. Worth a visit for the matcha shortcake alone is Kova the Japanese bakery. And take a look at Black Sheep Coffee before or after your walk round the installations. They do a great hot chocolate as well as outstanding coffee.

Getting to the Battersea Light Festival

Travelling to the Light Festival couldn’t be easier with the recently opened Battersea Power Station Underground station, which is just a few minutes’ walk away. It means you can get to the area in just 15 minutes for the West End and the City. Or you could bike, bus or train too. Battersea Park train station is only a seven minute walk away.

...we now have more outdoor space to host these spectacular installations following the opening of a further public realm in front of the Power Station. Establishing a new cultural district for London that generates a sense of community has always been important to us and our shareholders while regenerating this iconic site. This will continue to be a key focus for our events programme in 2022.