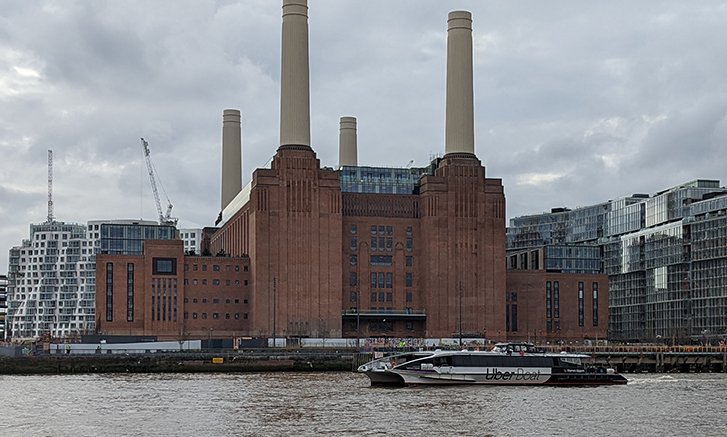 Whether you’re sightseeing or commuting, there’s no better way to get around London than by Uber Boat by Thames Clipper.

And with the introduction of two new hybrid high-speed passenger ferries in late 2022 and spring 2023, it will be one of the fastest and cleanest ways to travel too.

The new Uber Boat by Thames Clipper ferries are currently being built at Wight Shipyard on the Isle of Wight and are the next step in eco-friendly travel. The new ferries will operate solely on battery power between Tower and Battersea Power Station Piers and then recharge for journeys beyond central London towards Woolwich or Putney. The technology is not reliant on shore-based charging either. The new boats will use excess power from their biofueled engines to recharge their batteries for the longer stretches.

The sleek catamaran design of the boats will be a welcome addition to the river, and are futureproofed to go greener as new technology develops. Sean Collins, the co-founder and CEO of Uber Boat by Thames Clippers said:

“We’re looking ahead with this hybrid design, ensuring easy conversion to green hydrogen or another renewable energy source…”

As well as being the most eco-friendly passenger boats in the Uber Boat by Thames Clipper fleet, they’ll also be the quietest too.

The introduction of the eco-friendly ferries is part of a long-term strategy for the business which is committed to achieving net zero with all new builds by 2025.

Sean Collins added: “This development in technology has enabled us to take the first major steps to meet our future environmental vision.

“…We are committed to supporting the sustainable growth, infrastructure and economic development on and around the river to endorse the river’s importance to London as a form of transport.”

British and international eateries such as Le Bab, Where the Pancakes Are, Poke House, Clean Kitchen Club and Paris Baguette will all be opening in the autumn.

Uber Boat by Thames Clippers currently stops at 23 piers along the Thames between Woolwich (Royal Arsenal) Pier and Putney Pier. And services run from early in the morning until late at night, seven days a week. Which is why Uber Boat is so loved by Battersea residents commuting to the City. Currently, it's less than half an hour from Battersea Station to London Bridge City, and only 50 minutes to Canary Wharf. Of course, it will be even faster with the new ferries. And you can even bring your bike on board at no extra cost.

Check the timetable and plan your journey. Or book tickets.