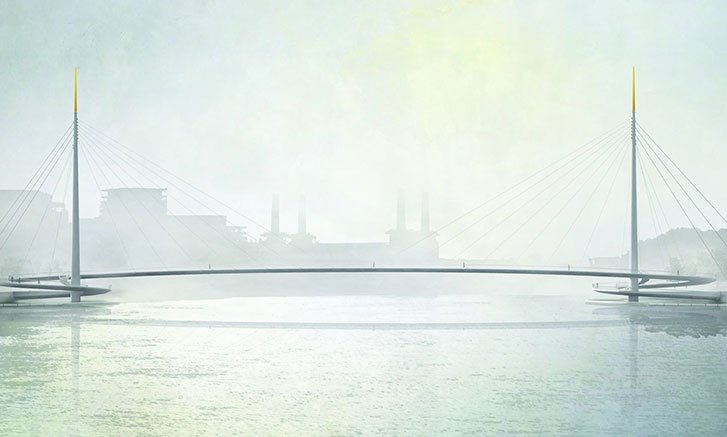 A new pedestrian and cycling bridge across the Thames at Nine Elms has taken a step closer to becoming reality. London Borough of Wandsworth’s finance committee has now given its support to the preferred location, as identified by the council-appointed bridge design team.

So where will it be?

The preferred location of the - what’s known as the Nine Elms Pimlico Bridge - is between Grosvenor Road riverbank (west of Claverton Street) on the north side of the Thames at Pimlico and Kirtling Street, near Battersea Power Station in Nine Elms on the south side. This location is seen as being an opportunity to shape the public riverside space while creating a new sustainable transport link between Nine Elms and Battersea and the rest of London.

Following an international design competition in 2015, the design team, led by Denmark’s Bystrup Architecture Design and Engineering, was commissioned by Wandsworth Council to carry out exploratory design work for the new bridge in conjunction with architects Robin Snell and Partners.

The location was decided on after extensive consolations with the public and stakeholders and after a technical investigation into a number of feasible options. The proposed design from the Danish firm is a simple bridge that curves across the river, with circular ‘ends’ that keep the impact on the river bank to a minimum.

"Our design concept is based on an elegant bridge that provides simple and uninhibited access for all, with minimal impact on each bank. This will be one of the very first shared pedestrian and cycle bridges over the Thames, adding to the rich history of London’s river crossings." Erik Bystrup, Bystrup

The need for a new bridge

The new pedestrian and cycle bridge is a key infrastructure measure and will ensure easy access to the leisure and culture facilities, new residential properties, and 25,000 jobs being created in the Nine Elms and Battersea region. The bridge will be part of a wider infrastructure investment package that also includes two new Tube stations on the Northern Line extension – Nine Elms and Battersea Power Station – as well as the riverboat pier and the opening up of the Thames Path.

The new bridge will also meet the demands for safer cycle routes in the capital, and provide a greener more sustainable mode of transport for Londoners, as well as giving communities boh sides of the river a healthier travel option.

And it will close the largest gap in the river, between Vauxhall and Chelsea Bridges, and give the city another landmark to celebrate.

The bridge is fully supported by the London Plan and the Vauxhall, Battersea, Nine Elms Opportunity Area Planning Framework. The support from Wandsworth means the project will now carry out further technical enquiries and meet with affected local stakeholders and communities to understand and address any concerns.

£26 million in private sector funding has been identified from the development of the Nine Elms opportunity area and further funding options will be explored as more detailed design plans are developed.